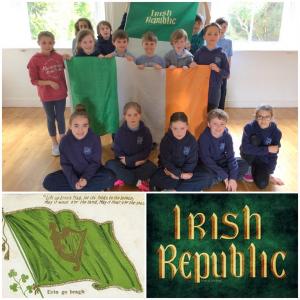 This week we marked the centenary week of the 1916 Easter Rising. Forms Five and Six presented a special Assembly to the school on Tuesday, explaining the background to the Rising and mentioning some personal connections that some of our children have with people and places involved.

Form Three continued learning about the Easter Rising in class. Donncha brought in an “Irish Republic” flag and we compared it with the tricolour. Both flags were flown on the GPO on Easter Monday 1916.

Here are some facts that we discovered about our national flag. The 1916 Rising made the tricolour famous, but it was first flown publicly in Waterford City by Thomas Francis Meagher in celebration of the Revolution in France in 1848.

Meagher wanted a new Ireland where Irish Catholics and Protestants could join forces to win independence. On April 15th 1848, he presented a tri-colour (made for him by a group of French women) to the citizens of Ireland.

He explained:” The white in the centre signifies a lasting truce between the orange and the green.”

The tricolour was officially adopted as our national flag in 1937.