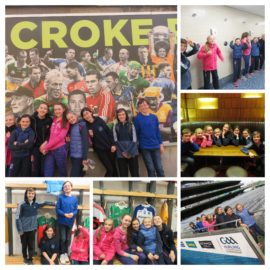 On the 20th October Form six went on an outing to Croke Park. It took us around 45 minutes to get there on the bus. When we arrived we went into the reception, got our wrist bands and ate our lunch. After lunch we went into a room with a big screen and watched a short film about how Dublin won the All Ireland Final against Kerry.

Soon after the film we went into the tunnels where the players get off the coaches. Our tour guide told us that before all the great technology of the 21st century the first groundskeeper only had three sheep and a horse!!

Then we walked into the players’ lounge which had a really cool chandelier. It had 32 Gaelic footballs to representing the 32 counties and 70 sliotars to represent 70 minutes in a match.

After that we went into the changing rooms. Both the changing rooms were exactly the same. Next we went into the warm-up room where the players prepare for before the start of their up-coming match. There was a button on the wall which simulated the roar of the crowd and we walked out to the tunnel. We had to stand beside the pitch because the pitch was sacred ground and we weren’t allowed to walk on it.

We went up to the place where the winners received the San Maguire Cup – the place where some of the greatest players ever to play GAA have stood. Then we climbed the hundreds of steps to row ’Z’. It was extremely high up there and we could see the whole stadium really clearly. On our way back inside we stopped at the memorial for ‘Bloody Sunday’. It was very interesting but also sad.

Then we went into the Croke Park museum. The first thing we saw were huge flags hanging down from the ceiling, each one representing a different county in Ireland. The next thing that we saw was everyone’s favourite: a giant case full of all the trophies that had been won in the past. Hidden behind a wall we discovered two different games that you could play. One of them had little red buzzers and you had to jump up and press them all as they lit. The other game tested your reaction time – there were circles on a wall and if the circle lit up red, you had to throw a ball at that circle. Then we walked into another room. On one half of the room there was a hurley and a sliotar and you could practise hurling. On the other side was a football that you could shoot into three different holes on a wall.

When we had finished playing the games we got the bus back to the school. This was a great trip, and we all had so much fun!