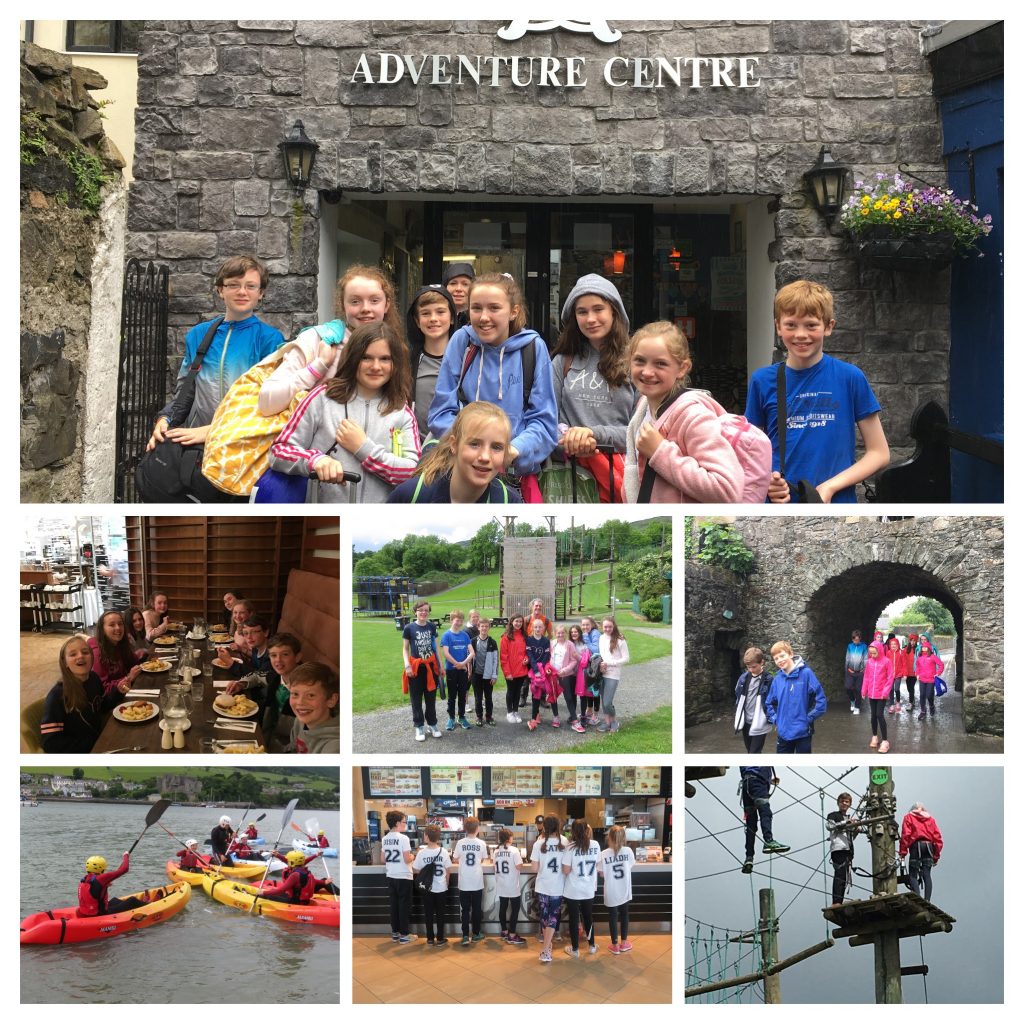 At 9.00am we got on the bus and set off. Our first stop was the Applegreen services at Lusk. We all bought some refreshments and played on the indoor and outdoor play areas. Then it was time to get back on the bus and continue our journey.

We continued on to Carlingford. When we arrived we played on yet another playground before checking in to the Centre. We were greeted by the staff, given a quick briefing, shown where to put our bags and introduced to our first instructor David.

David lead us to Carlingford Lough to begin our first activity – kayaking! We put on our wetsuits and helmets then, instead of giving us a kayak, David took us to the end of the pier where we all jumped in! We all had several goes at pier jumping before heading back to the boat house for the kayaks.

Once in our kayaks, we headed off. Some of us were more natural than others but everyone got the hand of it eventually. Once Aoife had mastered it she shouted, ‘I’m on a roll!’ before kayaking straight into the pier. We all headed towards some floating pontoons where there were two huge trampolines bobbing around on the sea. Juliette was so enthusiastic that she threw her paddle onto the pontoon then promptly floated away in her kayak. Aoife came to the rescue (well at least she tried) but they both started drifting from the group and has to be retrieved by an instructor called Eoin in the motor boat!

Once on the trampolines, we all had great fun running, bouncing and jumping in (sometimes with a little help from our friends). When Aoife tried to push Conor in he ended up catapulting over the side like a rag doll! Everyone had great fun! 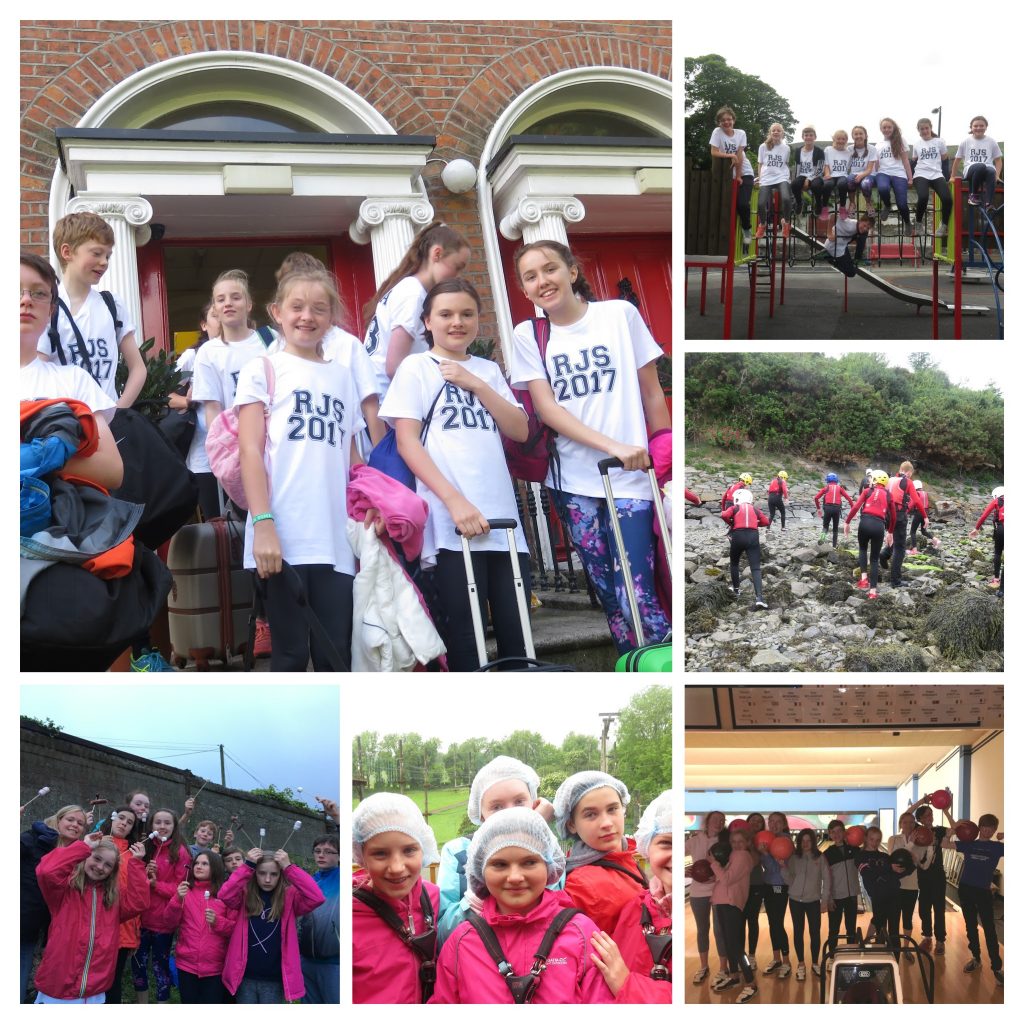 Next, we kayaked over to a rocky shore and found some tiny crabs to hold. Then we went into a small tunnel, which lead to a waterfall. There is a local legend that if you hold your head under the waterfall for 10 seconds, you will live a day longer: we all did it. Next we kayaked over to a grassy area where we played some games using the paddles. Liadh was the eventual winner but everyone laughed a lot. By that time we had been on the water for almost three hours so we headed back to the boathouse. We carried our kayaks up the beach: it was exhausting! We got dressed and headed back to the Centre. The first activity had been a great success!

After a quick shower in our rooms it was time for dinner. We went to The Four Seasons where we had a delicious meal then went back to the Centre ready for the evening activity. We met Andy who took us on a ‘murder mystery trail’ around the town. We had to find clues to solve the murder. Along the way we also had to write, draw and take rubbings. Aisling, Tara, Liadh and Juliette’s team won by one point!

At 9.00pm we went to the beach where we cooked sausages and toasted marshmallows on a BBQ. We played games, sang songs and told stories until we were all tired and ready to go back to our rooms. The girls were in one room and the boys were in another. We stayed up late eating lots of sweets and chatting.

On Thursday morning at 7.15 am we were woken by Mrs Glass banging on our door. We got up, dressed, stripped our beds, packed our bags and cleared the floor all in good time to be greeted by a cheery good morning and ‘The Toast Rap’ over the intercom. We went to ‘The Four Seasons’ where we could help ourselves to a buffet style breakfast to make sure we had plenty of energy for the ‘Sky Park’, our next activity.

We met Andy again and he led the twenty minute walk to the ‘Sky Park’ course. We were all kitted out with harnesses and watched a short video on how to use the equipment. Then we went to the training course. The courses were like obstacle courses or adventure playgrounds but they were high in the air. There was a lot of balancing, swinging and climbing involved.  The training course was only a metre off the ground, but it allowed us to get used to all of the obstacles. After we had completed our training, we were allowed to go off and explore. Some people did the medium or high courses, some did the base jump and some did the zip lines.

We were at ‘Sky Park’ for about three hours and we all worked as a team, supported our friends and had great fun. At the end we hung up our harnesses and went back to the Centre. We collected our bags because it was time to say goodbye. We were sad to leave but happy to have had such an amazing time.

Once we were on the bus Mr. Adair and Mrs. Glass had a surprise for us – after our usual stop at Applegreen we were going bowling. Everyone was excited again: the trip was not over yet. 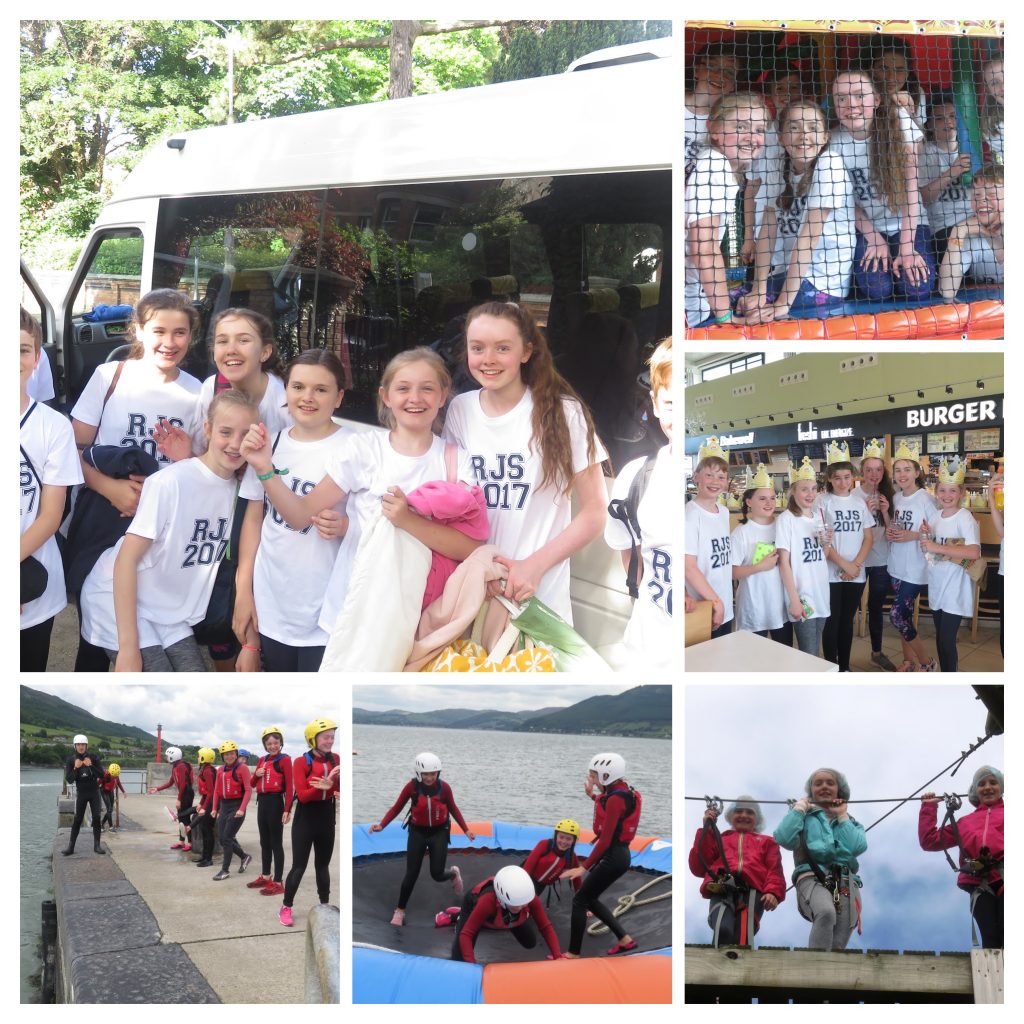 Once we were at the bowling centre and we had changed our shoes, we split into two teams. The girl’s team and the boys and staff team. We had great fun bowling and trying to beat each other’s scores. Mrs. Glass was the only one to skid down the lane and fall over! After almost two games, we were out of time. Kate and Mr. Adair were the winners but we all had a great time.

We got back on the bus to head back to school. Once at school we were happy to see our parents and they were happy to see us. We looked forward to telling them all about our amazing trip to Carlingford – memories to treasure for years to come.