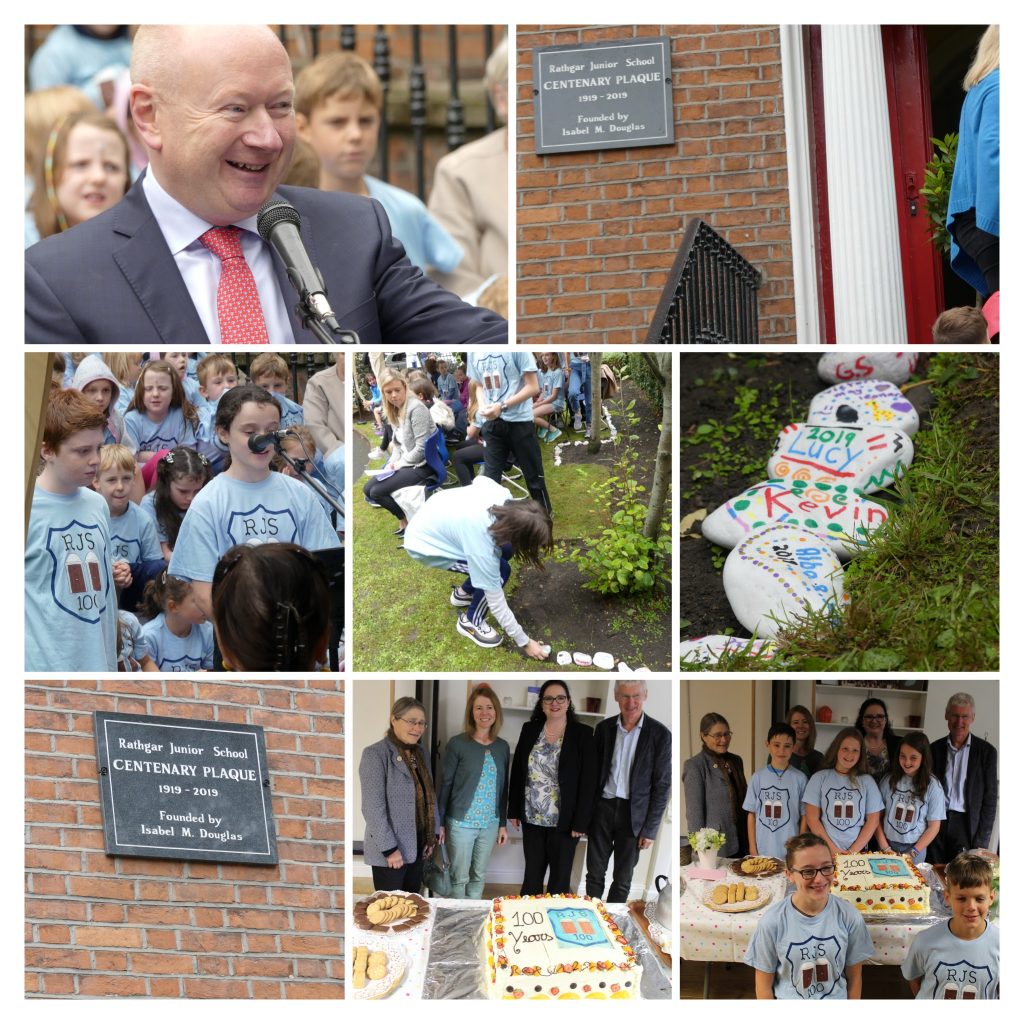 As we start a new year together in RJS, we remember and celebrate our founder, Isabel Douglas, who opened the doors of No.62 Grosvenor Road on the 9th September 1919.

On the 9th September 2019, exactly 100 years later children, staff, Directors, past pupils, past staff members and relations of Isabel gathered together not only to pay tribute to Isabel but also to recognise how the foundations, principals and ethos on which the school was built have stood the test of time. We were delighted to see such a wonderful turnout, including Ms Bewley, a former Headmistress of RJS, as well as former teachers who inspired so many children over the years.

Having spoken to many of our past pupils, and having listened to their stories, one thing stood out clearly to me. RJS has given so many children the opportunities, direction, and confidence to discover their identity, to be proud of their individuality and to follow their dreams. Niall Morris said, “The person I am now was formed in those early years of school. How fortunate I was to go there.”

Under the headship of every Principal or Headmistress since Isabel Douglas, the core values and traditions of the school have been kept alive. The teachers who work here have a special talent for inspiring the children, for opening their eyes to infinite possibilities, to nurturing and encouraging their curiosity and to really develop their passion for learning.

Ealenor Flegg recalled how “One of the things that inspired her most was history class with Mrs. Bradley. She remembers Mrs. Bradley reading to the class from Brehon Law, almost incoherent with laughter: “The poet who overcharges for a poem shall be stripped of half his rank in society”. Along with almost half of the pupils in that class, she went on to study history at Trinity College Dublin. That can’t have been accidental!

Games staff including Mrs. Robinson, Gillian Fox, Mrs. Kelly, Gillian Butler, and other wonderful coaches have inspired children to pursue their hockey skills at national and international levels. Mitch Darling recalled how from a young age he was taught to be humble and the value of teamwork. No more so than when the then Principal, Heather Bewley, wouldn’t let him win all the trophies on sports day (even though he had) and gave him Smarties as a consolation!

Other stories include how RJS offered an inclusive learning environment where corporal punishment was not allowed and where children were taught to do their best for the intrinsic satisfaction it brought.

At RJS, we have always reached out to those less fortunate than ourselves, especially in our local community but also abroad. Kindness, empathy, fairness, justice, generosity, and humility are always encouraged. Former UN Assistant General Secretary Denis Halliday, Mr. Justice Robert Haughton, former Chief Justice of

Ireland, Susan Gageby Denham, and Dr. Micheline Sheehy Skeffington have all attributed their life’s journey to the seeds that were planted during their most formative years in RJS and we are delighted that some of them are here today with us.

Janet Moody told me that, “Kindness and care for others were the foundation stones of Miss Douglas’s approach to education….and that…even though the school was founded on Christian ethics…there was never any focus on what denomination or religion the children belonged to. The pupils were never labeled as belonging to one particular tradition – it just wasn’t an issue – everyone was equal – everyone was part of a happy community.”

Averil Opperman shared her memories of her aunt Isabel and how her love of nature stayed with her into adulthood and left her with one of her happiest memories… she found loads of newts in a pond next door to her garden at home and she thought Miss Douglas would be delighted to study them with the class, so she brought the poor creatures into school in a basin with pebbles, water, and weed under which they hid. Suddenly in the middle of class, an agitated Miss Douglas rushed into her classroom – the newts had gone exploring…all over her office, over the carpet, up the curtains, everywhere! Roger Bewley and Averil rushed in to help find them amidst much giggling!

Nature, flowers, plants, and animals were close to the heart of Ms. Bewley also. I remember her prayers at assembly where she would often refer to God’s creation, the trees, flowers, rivers, seas, birds, insects and animals. I remember the hymn ‘All things Bright and Beautiful” was sung on many occasions. I smile to myself now as I open prayer books as I now prepare for Assembly, where Ms. Bewley had written little notes, and I feel like I am standing in her shoes as I repeat to the children today, some of what Ms Bewley said to me as a child.

Performance arts have always featured in the RJS curriculum. Mr. Morris recalls that classes were small and individual voices were heard. He remembers being encouraged to be creative and to be ourselves.

So, how did it all begin?

From a tiny seed, a mighty tree has grown. Nine pupils walked through the doors of No. 62 Grosvenor Road on the first day – 9th September 1919 – and, over the course of the next 12 months, the number of pupils on the register climbed to 52. The school continued to grow rapidly under the headship of Miss Isabel Douglas, a Quaker who was trained in Froebel education and had a somewhat visionary and ‘modern’ approach to education. By 1930, 97 names appeared in the roll book.

Miss Douglas was an enthusiastic advocate for the teaching of Irish, poetry, art, handwork and nature studies. The Quaker ethos meant that corporal punishment

never featured in the school and parents travelled from as far away as Bray to bring their children to a school where they knew they would never be beaten.

Rathgar Junior School now has a total of 168 pupils. The school welcomes children from all faiths and backgrounds and emphasises individual attention and a supported learning environment where we try to keep class sizes no larger than 22.

Today, we continue to support learning through a rich hidden curriculum, which incorporates skills such as debating, public speaking, project work, cooking, choreographing plays and dances, sound and lighting, teamwork and collaboration, delegating and taking responsibility for various roles and event management for the various charitable activities held throughout the year. We offer a holistic approach to learning and every child is supported through the SPHE curriculum and our well-being programme and initiatives.

Many of the initiatives that Miss Douglas introduced in the early days of the school, and which made the school a pioneer among primary schools of its time, continue to this day. These include Christmas plays, historical and geographical school trips, nature walks and arts and craftwork, including pottery, sewing, embroidery and model-making.

We offer now also offer a wide range of after school activities, including drama, dancing, hockey, tennis, rounders, Chess Club, Coder Dojo Club (scratch programming), Choir, instrumental lessons and, new to the programme this year, we now offer music therapy, morning yoga and Lego Club. As part of the Association of Independent Junior Schools, we participate in the many events hosted by the various schools and RJS hosts an annual Chess tournament. 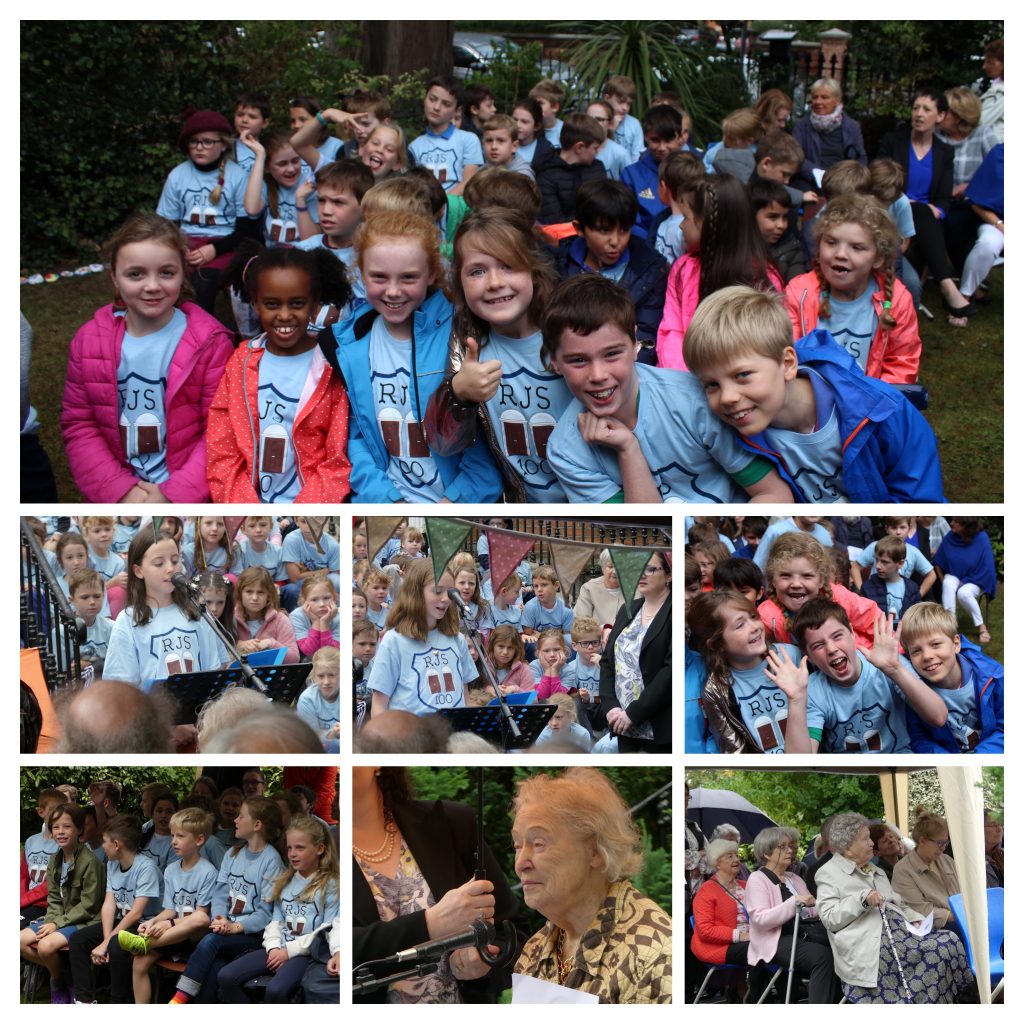 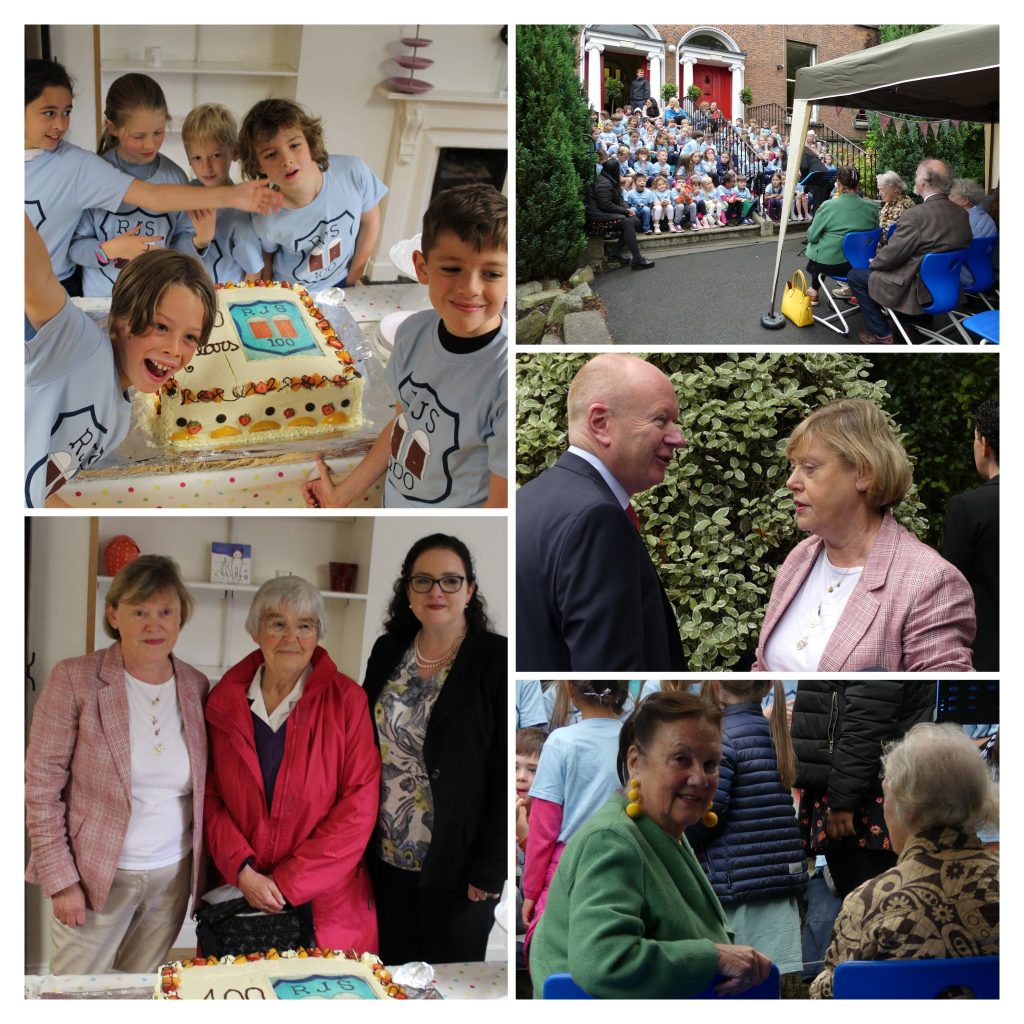 children a unique opportunity to enjoy learning and to experience a broad and rich curriculum of education in an atmosphere of love, care, respect, honesty, forgiveness and consideration for others.

Over the past 100 years, past pupils of RJS have excelled in many fields. Old scholars have gone on to become academics, writers, entrepreneurs, musicians, teachers, professional sportsmen and women, artists, chefs and activists. And, given the school’s commitment to the Quaker principles of equality, integrity, peace and community, it is not surprising that RJS has produced a number of lawyers. Not surprising too that the school has produced a number of activists and campaigners.

At RJS we encourage our children to do their best, to learn from their mistakes, to be proud of what they have achieved, but most of all, we as their teachers want them to enjoy the process, to enjoy learning through discovery and creativity. Isabel Douglas believed that all children should participate in arts and crafts, in studying the beauty of nature and should participate in lessons as Gaeilge. These traditions continue today and as the years move forward some new traditions have been added on, such as Mrs. Silke’s Pancake day and Family Day. The staff of RJS feel privileged to be

To the family and relations of Isabel Douglas, we would like to convey our gratitude for such a wonderful and inspirational woman. We are together 100 years on, united in the faith of her convictions. To Mrs Silke, Mr Adair, Ms Bewley and all former members of staff, we would like to convey our gratitude for the part you played in the history of our school. To the past pupils of RJS who attended our ceremony, it meant a lot that RJS still holds a special place in your hearts.

We unveiled our centenary plaque which was kindly donated to our school by the Massy Family. I would like to convey our deepest gratitude to them for this beautiful and symbolic gift.

We decided that it would be a nice idea to put a time capsule together as a way of remembering the school’s centenary year. I asked the children what we would like to put into it. They came up with the following ideas: Some children wrote letters to themselves, saying what they think they will be doing in the future; Some wrote about what RJS means to them and wrote down their favourite memories; They put photos of the children and our school over the past year into the capsule as well as photos of documents of past pupils that we found in the Quaker archives in Stocking Lane; They put news cuttings of events and things that happened in 2019 so far; They put euro coins in the capsule, one of each, and euro notes; They put in our Centenary Calendar for this year and our official school photo so that we can remember all the wonderful things we did this year; They included one of the t-shirts we got made and photos of our class art piece that each group made together. These pieces displayed in the gym.

I asked all the children in the school, including last year’s Form 6, to write their name on a commemorative stone and to do a little drawing or decoration on it. These were placed in the garden so that in the future, children will know who was here in 2019. We invited our guests to decorate their own stone and they put them in the garden also.

To end our ceremony, we had a moment of silence, to reflect on the legacy that Isabel created and to remember all those who have played a part in its history.

I would like to convey my gratitude to all who helped in putting our special ceremony together. I would like to wish all the children, staff and parents a wonderful year. We have so many things to look forward to!