This week in History, Form 3 has been busy learning about the Egyptians.
We learned about the importance of pharaohs and the role of mummies and pyramids played in ancient Egyptian society and why archaeologists and scientists have been intrigued by them ever since.
We were so surprised to find out that the Great Pyramid (138 metres) is taller than The Spire (120 metres) on O’Connell Street.
We took a virtual trip inside the Great Pyramid of Giza and then created our own pyramids using recycled items from our household which we learned about in Geography.
We really enjoyed our virtual Art lesson to create some amazing portraits of Tutankhamun 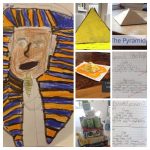 . He was only nine years old when he became a pharaoh. We wrote about how we would have felt becoming a pharaoh at nine years of age, and all agreed it must have been very daunting for him.
In English we also created some wonderful pyramid poems.